Looking for Something Fun and Different? Try These Plants 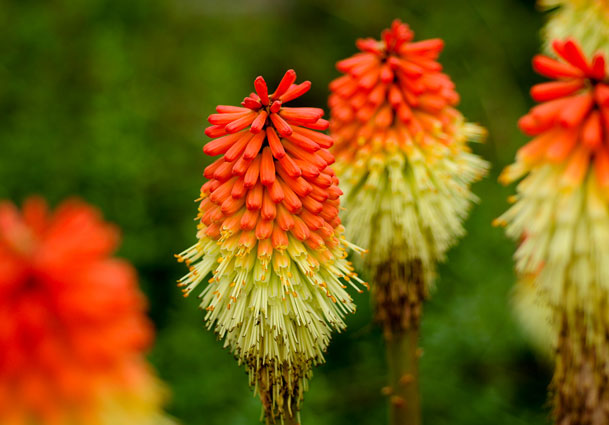 Kniphofia also known as Red Hot Poker shows why it gets its name.

Some plants are more than pretty faces in the yard. They do things, grow in odd ways, or give us interesting twists and surprises to make gardening fun. If you’d like to spice up your landscape with a few of the more offbeat, yet easily growable, members of the plant world, here are eight to consider:

You can guess what this looks like from the name – plants with spiky flowers that bloom mainly in red, often with yellow flowers at the bottom, or sometimes orange or yellow. Winter-hardy to Zone 5, perennial red hot pokers (Kniphofia) send up their rod-like stems from clumps of grassy leaves for several weeks in summer. Some people call them torch lilies.

Flick the leaves of the sensitive plant and they fold down, as if the plant is trying to hide.

This little, trailing member of the mimosa family (Mimosa pudica) is king of the action plants. When you touch or flick its leaves or stems, they fold down, almost as if the plant is trying to hide. It’ll also “hide” in a windstorm. But when the wind drops for a few minutes, the leaves and stems return to form.

Sensitive plants are tropical, (you may have seen them growing wild on a tropical island) and won’t withstand frost. Garden centers often carry young plants in spring, but these are easy to start by planting seeds in pots or in the ground, once all threat of frost is gone. Definitely a fun project for children.

Here’s a plant that seems like it’s looking back at you – the eyeball plant.
George Weigel

The flowers of this annual (Spilanthes oleracea) are yellow, round, and sit at the top of the stems. Red spots form at the top of the flower orbs to make it seem like little eyeballs are looking up at you. It’s also known as the “toothache plant” because its leaves and flowers contain an analgesic once used to ease toothaches.  Eyeball plants are sometimes sold as spring annuals, but like the sensitive plant, they’re easy to start from seed too.

The blooms and flower buds of the popcorn plant resemble popcorn popping. The flowers even smell like buttered popcorn.

The golden flowers of this husky tropical (Senna didymobotrya) look a bit like a stalk of popcorn clusters. Even odder is that they actually smell like buttered popcorn. Plants can grow up to 4 or 5 feet tall in one season.

Garden centers sometimes carry these plants for after-frost planting, or they can be started from seed. Great in large containers.

These flower heads of ‘Globemaster’ alliums are nearly the size of softballs.
Colorblends

Many members of the onion family produce round heads of purple or white flowers of varying sizes atop stalks that spring from underground bulbs in late spring. One of the most impressive types is the Persian or giant allium (A.giganteum), which carries purple flowers in balls the size of tennis balls and even softballs. Look for varieties such as violet ‘Globemaster,’ purple ‘Gladiator’, and violet-blue ‘His Excellency’.

Other species produce big, but looser inflorescences, with flowers borne umbrella-like at the end of longer stems, giving the appearance a star that’s exploded. Star of Persia (Allium christophii) and the tumbleweed onion (Allium schubertii)fall into this category.

Alliums are cold-hardy even in the northern-most states, returning year after year before going dormant by mid-summer.

Colocasia is another plant that grows from bulbous structures (actually tubers). These are famous for their gigantic leaves that are shaped – and sized – like elephant ears. They are known as “taro” in the tropics, where their tubers are smashed and eaten as a staple food. Elephant ears are mostly grown as annual ornamentals in colder climates (Zone 6 and lower), either in the ground or in large pots. The varieties with glossy and nearly jet black leaves are particularly showy and most popular. Two that you’re most likely to find in garden centers are Royal Hawaiian® ‘Black Coral’ and ‘Black Magic.’

Before frost in fall, dig up the tubers very carefully to avoid damaging them. Clean off the soil and any remaining leaves, and leave them to dry in a dark, frost free place for a couple of weeks. Then you can store them inside in dry peat moss or perlite for replanting next season.

‘Swartkop’ Aeonium has glossy black leaves arranged in an umbrella pattern around the stems.

Lots of tropical succulents make great oddball and easy-to-grow summer plants. But a trendy one lately is this upright species that also has glossy black leaves. ‘Swartkop’ is also unusual for its stubby, trunk-like main stem, and its umbrella arrangement of the leaves around the top of the plants. Look for it in the houseplant section of garden centers.

While you’re at it, check out all sorts of other succulents that can be grown outside in troughs, window boxes, and pots in summer, including the flapjack plant (Kalanchoe thyrsiflora) with its red, paddle-like leaves, living stones or Lithops (which look like stones), or one of the many true cactuses with red, orange, or yellow “caps” of flowers. Beware that these haven’t been compromised with the addition of straw flowers on top to give the illusion that the plants are in bloom.