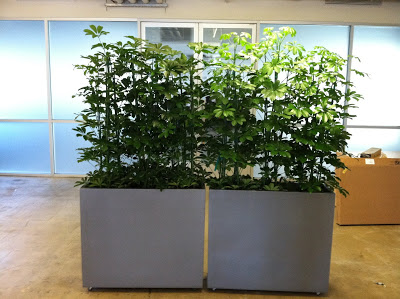 This article was published in the May 12th Wall Street Journal: Reopening the Coronavirus-Era Office: One-Person Elevators, No Cafeterias Link to Article.

The article discusses how the open office format is obsolete in the post covid world and points out things that need to be updated to allow for safer employee interaction.  See complete article below.

Everything Grows is excited to help with these changes and redesigns and offer some fantastic modular plant wall products to help partition work space and direct traffic.

Offices Revamp to Keep Germs At Bay Once Work Can Resume

Welcome back to work. The corporate cafeteria is closed. The coffee makers are unplugged. And the desks are separated by plastic.

Every part of office life is being re-examined in the era of Covid-19. When employees file back into American workplaces— some wearing masks— many will find the office transformed, human-resources and real-estate executives say.

Elevators may only take one person at a time. Desks, once tightly packed in open floor plans, will be spread apart, with some covered by plastic shields and chairs atop disposable pads to catch germs. The beer taps, snack containers, coffee bars and elaborate gyms and showers that once set high-dollar, white-collar environments apart will likely remain closed to prevent the spread of coronavirus. Many changes won’t go away until the virus does.

The office adaptations reverse a decadeslong push in American corporations to cram workers into tighter spaces, with few separations between colleagues. Companies once spent millions of dollars retrofitting spaces to create rows of open desks, intimate conference rooms and elaborate communal gathering areas. Those designs are now problematic, executives say. “All our agencies are open floor plans and that was a great idea in the past, but it now works against us,” says Harris Diamond, chief executive and chairman of advertising giant McCann Worldgroup.

Modifying offices to safely allow some workers to return is even more challenging than sending people home, and varying local guidelines complicate the picture. Some places, like New York, mandate masks must be worn in public, while others, like Texas, have overruled city ordinances that require people to wear face coverings when they cannot socially distance. Infor, a New York-based business cloud software company with roughly 17,000 employees, plans to ask all employees to wear a mask while working and isn’t rushing to reopen its offices, even if state and local officials give clearance to return, a spokeswoman said.

At its headquarters in Riverwoods, Ill., near Chicago, Discover Financial Services is leaning toward reseating employees at every other workstation. “We’ll essentially put X’s on desks and chairs” not to be used, said Andy Eichfeld, Discover’s chief human-resources officer.

Some hallways and stairwells will become one-way, and many conference rooms will stay shut. If the company opts to check the temperature of every arriving employee, Mr. Eichfeld’s team is considering how to stagger arrival times to avoid people congregating in building lobbies, awaiting the test.

Co-working giant WeWork once prized density, making corridors narrow on purpose so that people were more likely to bump into each other and chat. It rented out access to its “hot desks”—large, shared tables with no assigned seating—at many of its more than 700 global locations for between $300 and more than $600 a month in New York City. To socially distance hot desks, half the chairs are being subtracted, and WeWork is removing 30,000 conference-room chairs around the world to keep people from congregating, said Hamid Hashemi, WeWork’s chief product and experience officer.

McCann Worldgroup, one of Interpublic Group’s largest ad agencies, is considering assigning different letters to people in many of its U.S. offices, allowing each group to come into the office on different days of the week. Open-floor-plan layouts are under review.

McCann’s New York office will close its bar and cafeteria for the rest of 2020. Instead, the company has ordered dozens of microwaves and refrigerators so people can bring in their lunch. The appliances will go in enlarged kitchen areas being erected on every floor. Everyone will be expected to use the cleaning supplies stationed nearby to wipe down communal buttons and door handles.

Another ad agency, FCB, is getting rid of disposable cups, utensils and condiments. The agency is enlarging its conference rooms and installing more video screens, so people will be able to maintain social distancing while attending meetings.

Interpublic is also working with building managers where it leases office space to ensure worker safety. One suggestion: putting tape on the floor of elevators to outline boxes. If there isn’t an empty block, a passenger cannot ride.

At one of Interpublic’s agencies, if only two or three staffers ride an elevator at one time, it is estimated it would take two to three hours to get staffers to their floors, which requires staggered work start and end times to avoid congestion.

Squarespace Inc. says some of its offices will only be able to take one person per elevator ride. To avoid a lobby pileup, Qualtrics, a unit of German software giant SAP SE, will invite some workers to commit to taking the stairs.

When HP Inc. reopened its offices in Wuhan, China, a few weeks ago, allowing a limited number of employees to return, the computer and printer maker gave everybody a welcome back kit with three new office essentials: masks, gloves and a bottle of hand sanitizer.